the slide show and then use the Adobe Acrobat page controls to go through the slide show.   ​​The photos do not change automatically.

​While the rest of you mounted up and headed to Graceland I had another goal. In October of 1962 the Ole Miss campus and the town of Oxford erupted. A lone state resident, a high school graduate and Air Force veteran, demanded his right to go to the college of his choice.  The problem was that he wasn't "qualified," qualified then meaning "white."

I wanted to honor that man.

I climbed into my Prius and departed Olive Branch, pointing due east and then south, to Oxford.  My GPS guided me along flawlessly, away from the flood plain in Olive Branch, to the rolling hills of Mississippi's midlands.

If kudzu were edible, Mississippi could feed the world. If it were combustible, gasoline would be back to 25 cents a gallon.  As it is, between the highway beautification act, the rural nature of Southern poverty, and the interstate freeway system, you don't see much of the poor and if they or their homes don't move fast enough kudzu covers them up.

I'm rolling along, pleasantly surprised by the scenery -even kudzu has its optical charms- and all the time Bob Dylan is singing inside my head, "Oxford town, Oxford town, everybody walks with their head bowed down...."

A few miles toward Ole Miss and I see a sign, "Tallahatchie>," and for a few miles Dylan is replaced by the tragedy of Billy Joe McAlister and wondering how things are these days up on Choctaw Ridge.  That passes and Dylan returns, "...three men died 'neath the Mississippi moon..."

When I finally arrived I was struck by how narrow the streets were. Making a right turn was an adventure; would you run up over the curb or would you cross into the oncoming traffic's lane?  I'm sure the place is busy enough on an ordinary school day, but added to this was a home football game to be played the next evening with the Texas A&M Aggies and the traffic was intense.

I found some side streets to poke about - lovely old oaks and cedars, the houses all neatly kept with gardens overflowing - no kudzu spotted- 'prosperous' would certainly be a fitting adjective for the town.  Locating a parking spot on one of the narrow back streets I began my walkabout.

Asking a young worker, I discovered that the campus was a mile from where I had parked.  I retraced my steps to my car and meandered about the campus area until I could find a lot that looked safe for a Northerner to park and explore.

The Ole Miss logo features a Greek revival cornice and columns, the design being borrowed from the administration building (The Lyceum) and thus that building became my focal goal.  The heart of the campus is a small quad on the top of a hill so that the rest of the campus falls away from it.  Don't know if I explained that very well, let's just say that the heart of the school sits above the rest and the whole looks across a valley to the next hill where the town resides.

I came up a hill from the southern slope and found myself on the edge of the quad.  There was the admin building and there to my enormous surprise was a beautiful tribute to James Meredith a monument honoring the lone man who dared to defy Governor Ross Barnett and the concept of "separate but equal."

On October 1, 1962 Meredith walked through the angry mob, enduring insults and threats and insisted on his right as a citizen of the United States and of the State of Mississippi to be admitted.  A full one hundred years since the beginning of the Civil War and eight years after the Supreme Court had ruled that "separate but equal" was inherently unequal, he was determined to claim his right to be a student at the state's premier university.

I was overwhelmed by the quad, the monument to a 'common' man and the historic events that had swept across the ground I was standing on.

Chaos reigned for several days that October. The Ole Miss band's Golden Girl, a graduate of my Ohio high school, fretted that she wouldn't get to twirl her baton before the homecoming crowd because of "outside agitators ruining it for everyone."  President Kennedy had to federalize 31,000 National Guardsmen to quell the riots.  Two people were killed and hundreds more wounded, but Ole Miss was now integrated.

I strolled around. Two students emerged from a class building holding exam papers and talking about the test, one black, one white.  A couple walked out of the gates of the tennis courts, rackets tucked under arms, she was white, he was black.  A professor held an outdoor class and around her sat Whites, Blacks, Asians and Latinos, a group of students walked by, equally diverse as the class.

I could not help but feel proud of what we as a generation and as a nation have done in the succeeding fifty years that allowed these scenes to come alive in front of me.  There's still a good deal more to be done to make ours a fully just society - I think of a "friend" who recently sent me a picture of Zulu women gathered for a tribal dance and labeled "Michelle Obama's College Class Reunion," but if Ole Miss can come this far, the nation can surely move forward too.

5.  A Side Trip to Oxford, Mississippi

Forrest didn't join everyone on the tour to Graceland and Sun Studios but, instead,

This is his report on the trip.

Please note that the PDF slide file will show in another tab or another window depending upon which browser you are using and your browser's settings.  Since some of these slideshows are fairly large files, it may take a few seconds for one of them to appear. 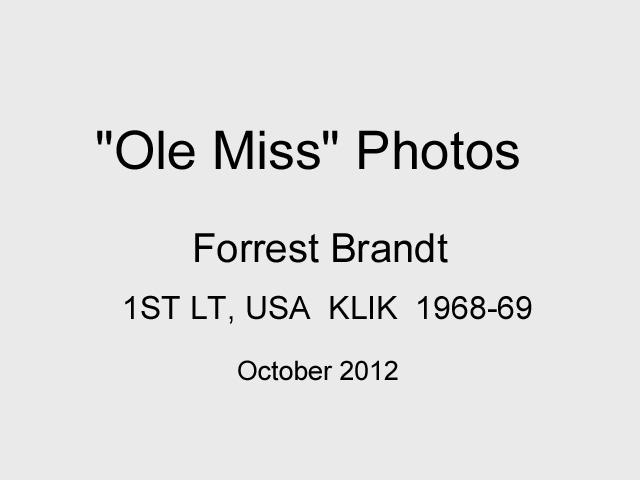