In this Aug. 14, 2012 photo, ground crew members work on a U.S. Air Force KC-135 Stratotanker at Kadena Air Base on Japan's southwestern island of Okinawa.  The most recent of the KC-135 refueling tankers currently in service started flying in 1964.  For decades, the U.S. Air Force has grown accustomed to such superlatives as unrivaled and unbeatable.  Now some of its key aircraft are being described with terms like decrepit. (AP Photo/Greg Baker)

The aging of the U.S. Air Force, a long-simmering topic in defense circles, made a brief appearance in the presidential debates when Republican nominee Mitt Romney cited it as evidence of the decline of U.S. military readiness.  His contention that the Navy is the smallest it's been since 1917 got more attention, thanks to President Barack Obama's quip that the Navy also has fewer "horses and bayonets."

But analysts say the Air Force has a real problem, and it will almost certainly worsen no matter who wins Tuesday's election.  It was created in part by a lack of urgency in the post-Cold War era, and by design glitches and cost overruns that have delayed attempts to build next-generation aircraft.

Looming budget cuts limit the force's ability to correct itself, they argue, as China's rise as a world power heightens its need to improve. And though the world's most formidable air force never had much use for bayonets, it's got more than its share of warhorses.
___
IKE'S LEGACY ? THE KC-135 STRATOTANKER

The U.S. probably couldn't have fought the air wars over Iraq, Afghanistan and Libya without the KC-135 Stratotanker, the Air Force's main aerial refueler, which allows fighter jets to remain airborne on long flights. America has President Eisenhower to thank for that. The KC-135 came into service during his watch in 1956.  The newest of the roughly 400 Stratotankers in service started flying nearly half a century ago, in 1964. "We are in unknown territory," said Lt. Col. Brian Zoellner, who has been flying the KC-135 for 15 years and is head of operations for 909th Air Refueling Squadron at Kadena Air Base on Japan's southwestern island of Okinawa.  "The unknown is at what point does the KC-135 become unusable." The KC-46A refueling tanker is being developed as a replacement, but probably won't start delivery for another five years.  If Congress has its way, some Stratotankers could still be taking off well into the 2040s.
___
THAT '70s SHOW -- THE F-15, F-16 AND A-10

The F-15, America's workhorse warplane since the Vietnam War, was designed to have a service life of about 5,000 flight hours.  The Air Force has more than tripled that, to 18,000 hours. The F-16, another key fighter, has been in use since 1979.  The Air Force began retiring the oldest ones two years ago. Another '70s-era fighter is the A-10 Thunderbolt, which provides close air support for ground troops.  It's now being rewinged because its old ones were riddled with cracks.  The General Accounting Office estimates the cost of upgrading and refurbishing the aircraft will be $2.25 billion through 2013. The Air Force is revamping its fighter fleet with the stealthy F-22 Raptor and F-35 Joint Strike Fighter, but production of the F-22 was cut short after its price tag swelled to nearly half a billion dollars a pop.  Delays and escalating costs have also dogged the F-35, which is now the most expensive Department of Defense procurement program ever.
___
SPY PLANES FROM THE '50s -- THE U-2

The fabled U-2 "Dragon Lady" spy plane is still being used to keep watch over North Korea and other hot spots.  The first U-2 flew in 1955, and the legendary Skunk Works aircraft became a household name for its role in the Cuban missile crisis, not to mention the propaganda bonanza the Soviet Union got by shooting one down in 1960 and capturing its CIA pilot, Francis Gary Powers. Many analysts argue the unmanned Global Hawk could do the job more effectively, but Congress has nixed that idea for now.  More than $1.7 billion has been invested in upgrading the U-2.
___
MAJOR KONG'S FAVORITE BOMBER -- THE B-52

Iconic, yes.  State-of-the-art, no.  The venerable B-52, remembered by movie fans for its starring role in the 1964 Cold War comedy "Dr. Strangelove," remains the backbone of the Air Force's strategic bomber force.  It dates to 1954 and was already losing its edge by the end of the Vietnam War, but nearly 100 B-52s remain in service. The Air Force developed the B-1 in the 1970s as the B-52's replacement.  President Jimmy Carter killed it, President Ronald Reagan brought it back, and none have been delivered since 1988. Next up was the stealth B-2 Spirit, which first flew in 1989.  Because only 21 were built, they ended up costing a prohibitive $2 billion each.  The Air Force is now hoping to upgrade with what it calls the Long Range Strike Bomber, but it's not clear when it will be ready.
___

To be sure, all of these aircraft have undergone massive overhauls and updates, and most experts agree the U.S. Air Force remains the best-equipped in the world.  Its aircraft aren't likely to soon start falling out of the sky, either, thanks to intensive, and expensive, maintenance. Zoellner, the KC-135 pilot, bristled at the idea his Stratotankers aren't safe.  He said they "fly like a champ." But Loren Thompson, of the Lexington Institute, a conservative think tank, said the graying Air Force is evidence of how Washington has failed to keep its eye on the ball.  "The reason the fleet is so decrepit is because for the first 10 years after the Cold War ended, policymakers thought the United States was in an era of extended peace," he said . "Then it spent the next 10 years fighting an enemy with no air force and no air defenses.  So air power was neglected for 20 years, and today the Air Force reflects that fact." Former Air Force Col. Robert Haffa, a senior fellow at the Center for Strategic and Budgetary Assessments, added that although ground forces were the primary concern in Iraq and Afghanistan, air power will be a key to future security requirements as the United States turns its attention to the Pacific and a strengthening China. Unlike America's more recent adversaries, China has a credible air force that could conceivably strike U.S. bases in the region, requiring a deterrent force that is based farther away, out of range.  America's bases in Japan -- and possibly Guam -- also are within striking distance of a North Korean missile attack. "As the nation looks to increased focus in the Pacific, these long-range strike platforms will be especially important," Haffa said. "Planes like the B-52 simply cannot survive."

Subject:  Not Just the Navy?  [NB: Not sure why this is the subject line--perhaps a prior message is missing? JimW]

Subject:  Not Just the Navy? 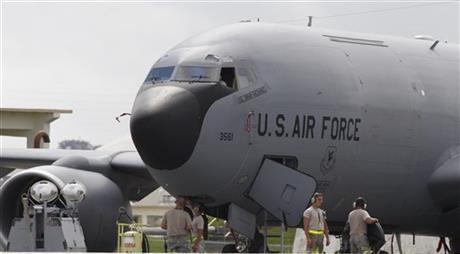