My Experience with Censorship During the Vietnam War

Taken from a Facebook AFVN Discussion Group on September 29, 2017

A little anecdote--in my spare time, I worked at AL1AF -- the MARS Station at Fuchu Air Base, Japan.   One of my primary duties there was to coordinate phone patches for the guys in Vietnam to all (via radio) back home.  In Japan we always heard the statewide stations about an hour before they did, so we would relay so when the conditions allowed, there was no time wasted coordinating things.

My point is that being in constant contact with [MARS] stations throughout Vietnam, it was not at all unusual for us to be working with them and then suddenly have them come back with "SECURING STATION"-- usually in a pretty excited voice.   What I found out was that in those situations they were under attack -- but for security reasons on our non-secure channels, they couldn't say so.

But even though I knew firsthand this had happened, we would get NOTHING at FEN reporting on these.   They simply did not come across our our news wire.  And then about a week later, there would be some snippet in the Stars & Stripes that fit the time frame.  What I later caught on to was that the Japanese Mainichi Daily News, generally had a more detailed story the day after the event originally occurred.

You bet the news we got was highly vetted before or even if we every got it.

[NB: I realize that this has little to do with censorship at AFVN, but "censorship is censorship.  Webmaster] 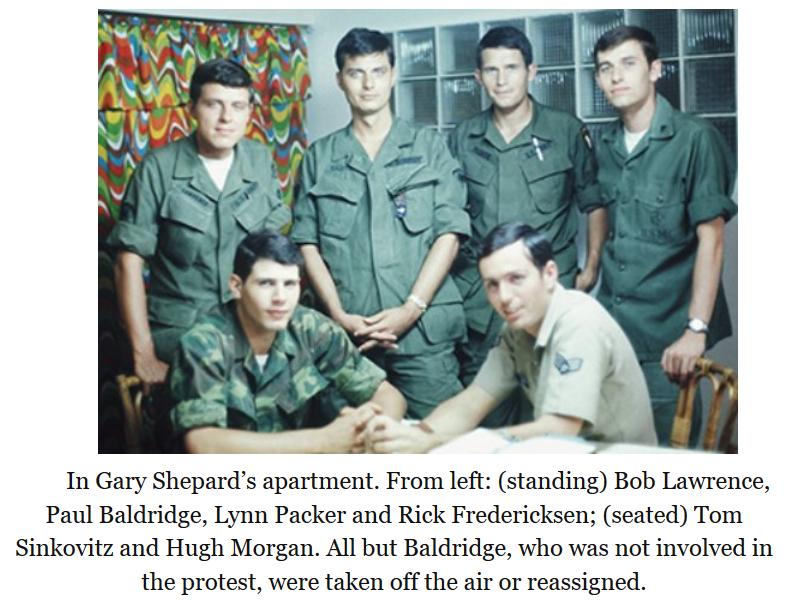 The main thing this story reminds me of is how and why I'm likely still here today.  If it hadn't been for Bob Lawrence, I might not have been. When I landed at Cam Ranh Bay in May 1970, I had a letter from LTC Jim Adams [no relation] saying I had an assignment with AFVN.  That had been set up through and with my commanding officer at AFNE, LTC Art Jones.  But getting that assignment was easier said than done, since where I was was under USARV, and AFVN was under MACV.

So when I presented my letter, I was, in essence, told it meant nothing.  Talk about a sinking feeling. Next thing I knew, I was under orders for the Americal Division, and on my way to Chu Lai.  It wasn't until much later that the Americal was made [in-]famous, courtesy of Lt. William Calley.

It was at Chu Lai that I, a first lieutenant and Signal Corps officer, went for a job interview.  As I sat in a Signal Corps company commander's outer office, waiting for said interview, there was a delay.  So I asked the first sergeant if I could use his phone, with which I called AFVN headquarters.  I got through on the first try, something I later learned was virtually impossible.

As soon as I reached Col. Adams, I shared my plight.  He put me in immediate touch with his personnel chief, Army Capt. Hugh Hastings, who told me my problem [USARV via-a-vis MACV] was something I already knew.  But Hastings added there was an AFVN detachment in Chu Lai commanded by Army Capt. Bruce Beebe, who I had known in Germany.  Once I had that number, I called for Bruce, again getting through on the first try.  Talk about luck.

When I told Bruce what was happening, he said to get out of there immediately.  He then picked me up and took me to officer personnel, where, upon presentation of my letter, my orders were changed from the Americal Division to AFVN Saigon. Rick Ferdericksen's story introduces Bruce Beebe, but doesn't say what happened to him after the cry of "censorship" hit the AFVN airwaves.  My understanding long has been that Bruce was made a "fall guy" and was transferred to AFVN Chu Lai.  That, for me, was a very good thing.

I spent my May '70-May '71 tour as first Chief of News/News Director, based in Saigon, and then as OIC of AFVN DaNang.  And I have Bob Lawrence to thank for being able to say, when asked what I did in Vietnam, that I spent half my tour in a movie ["Good Morning, Vietnam" with Robin Williams...and Adrian Cronauer] and the other half in a TV series ["China Beach," starring Dana Delaney and Marg Helgenberger] based in DaNang.

Upon completion of Infantry OCS, I was commissioned a Signal Corps officer at the Infantry School, Fort Benning, Columbus, Ga.  June 3, 1968. From there, I went to the Signal School at Fort Gordon, Augusta, Ga.  And one afternoon, with some free time, I went over to officer personnel to see what sort of assignment I might get if I were to give "Uncle" an extra year. When they came back with the American Forces Network Europe [AFNE], I, a Radio-TV Speech undergrad with a masters in Broadcast Journalism from The Ohio State University, said, "You got me."

Upon completion of my year in Vietnam, I separated from active duty in May 1971 at the Oakland Army Depot.  I then embarked on a "checked career" with a wire service [AP], network television [NBC] and as a pro sports PR guy [soccer/New York Cosmos and North American Soccer League; baseball/Baseball Commissioner's Office and Chicago White Sox; and golf/PGA Tour], before wrapping up at a "mom and pop" newspaper in Jacksonville Beach, Fla., the Beaches Leader.

If Bruce Beebe hadn't been in Chu Lai when I was about to become a Signal Corps officer with the Americal Division, Lord only knows where, or even if, I'd be today.  So thank you, Bob Lawrence.

In late spring of 1963 I was sent from Okinawa TDY to AFRS as the radio station approached its first anniversary on the air.  My job was exclusively news.  All our world copy was received by radio teletype, it was newspaper copy which is a totally different language from radio copy.  My job was to rewrite it as radio copy.  I had prior civilian experience in writing broadcast news copy. I “edited” news copy only slightly for clarity.  The “White House” became residence of the chief executive or president’s official house.  The reason explained to me was that even to English speaking people in Asia the term “White House” could intellectually become “crystal palace.” The only editing we did was slight as above, we never propagandized or slanted stories, although there were a couple of story subjects we just omitted completely although now, 50 years later I don’t recall what they were.  I have no idea of what took place after I left in the fall of 1963.

Thank you Bob.  It is always good to make sure the bases are covered.  I talked with Capt. Moody today for the first time in 40+ years when I worked for him.  He mentioned you, and the contact from the girlfriend of one of the photo journalists who were killed in the mine incident in Da Dang. Two of them had filmed stand-ups for my reports in Saigon.  You have really held together the AFVN connection from the end of the war until now.  Without you, who knows where we would be as a cohesive group.  As a newcomer, I appreciate what you have done.  And thanks for making sure I know about Capt. Moody.

The man for sure to talk to is Randall Moody the news officer at the time.  My memory is that he supported the EM's argument that there was censorship and said so in lectures at Dinfos.  One person to reach out to is the fellow who made the accusation.  My memory is that he is still in radio, I believe in PA.  There's also a short video of him actually making the accusation that is posted on the net on YouTube.

The AFVN censorship issue is the subject of a feature length story later this year in Vietnam Magazine.  I am reaching out to this group for your thoughts and memories.  For or against. Activist or bystander.  Please give your name, rank, time at AFVN, position, location and your thoughts on the matter, then, and now.  Please be concise, maybe just a few paragraphs to begin with.  Let's use my personal email address for this: fredericksen@outlook.com   While I won't be able to include everyone in the final story, all of your comments will be read and will help give me a broad base of knowledge to write at informed story.  Look for a fair, historical feature.  Pass on to others that may be interested.  Hoping to hear from you.

Help in researching for a book on the subject.