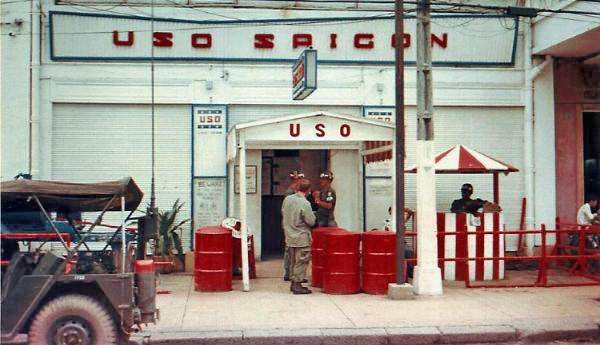 Forrest, I think that was the Saigon USO, not the Red Cross, on Nguyen Hue near the Rex.  As Dickie remembers their claims to fame were hamburgers, milk shakes, and calls home . Any of you ever go to the Special Services library on Nguyen Du just up the block from the Meyerkord BOQ and the Presidential Palace?

Right you are.  It was the USO.  But the person who greeted me wore the pale blue uniform of a Red Cross Volunteer.

Isn't it strange?  I was in Vietnam 14 months and I never saw a Donut Dolly!  Bobbi #1, the weather girl, worked for the Red Cross and we had a Red Cross emblem on the weather board but I always crossed paths with the USO.  Patty Krause, from the Saigon USO, came to the station every Wednesday to do a radio show from 12:00 to 12:30 if I recall.  And it was the USO that sent a station-wagon full of turkey dinners to the station at noon on Thanksgiving Day 1967.  When we were blown up...Patty was on the air and I have a tape of that somewhere.  She left and went back downtown...and within an hour she called back and said "We will arrange free phone calls home to any AFVN staffer because it is early in the morning back in the states and when your folks get up and turn on the Today Show this is the first news story they will see.  We all piled into the Gray Goose pickup and went downtown.  I got my mom and brother out of bed in NC at 3AM to tell them I was OK when they saw the news in the morning!!!!  They also had the only hamburger and milkshakes in town!!!  Of course I love our personal Donut Dollies...but they were always in the field not on Hong Tap Thu Street!!!!    Happy Thanksgiving to all!

Dickie
(Note:)  If [As?] I recall, Patty's husband was a Navy pilot who had been shot down and killed over N-Vietnam and they were based out of California.  Patty went to work for the USO and asked for Vietnam to help pay back or "finish" her husband's service to our nation!  She told me this story but never would do a TV interview.

Around the world young men and women of our armed forces are learning what we all learned so long ago.... being away from home for this holiday makes you grateful for family, friends and country. On this day in 1968 I was on my fourth trip to Saigon, an appointment with Commander Nash (?) to iron out details for the Duty First show.  After the meeting I wandered into the Red Cross center , close by the Rex, where a Donut Dolly met me with a a beautiful smile and a glass of apple cider, "Happy Thanksgiving!" she said.  "Would you like to call home?" Next thing I knew I was on the MARS network, hearing my mom's voice and saying, "Happy Thanksgiving!, over."  Bless them. Bless us.  Bless the Red Cross and the Donut Dollies.