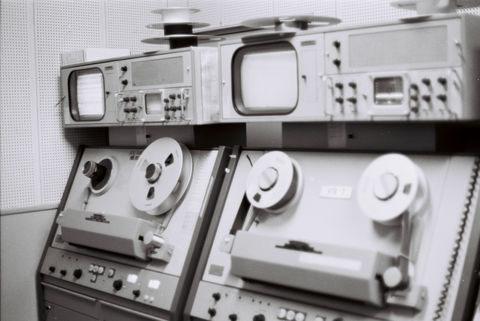 2" VTR machines at the Saigon Studio

I worked at AFVN TV in Saigon from 11/68 through 11/69 as a technician.  A good bit of my time was involved in making kines during the last several months of my tour.  A lot of my memories are hazy, but I believe the three VTRs were Ampex 1200s.  We transferred programming produced in the Saigon studio to kines for distribution around the country.  In addition, we received a lot of programming from the states on video tape which we also transferred to film.  The kine recording and processing was a new experience for me, and I struggled to get the quality up to a reasonable level.  Apparently the slant track technology was not at a sufficient level to allow us to provide a reliable delivery method.  I rotated back to the states and out of the Army.  I am interested to know what changes were made, if any, in the next years.

You engineers will appreciate this story, on vanishing 2-inch VTRs...only 100 of the old Ampex machines still operational, in the world. Didn't we use them at AFVN?

This following link is to a Washington Post article, published on July 16, 2013, about the Ampex machines:  Click Here

Talk about fuzzy memory. None of those names ring a bell. Perhaps I was buried back in the VTR room making kinescopes during that time. Also, I was probably getting into the get-home mode.

After I returned to the States, I met a guy who was in infantry.  He said they would park their APCs in a circle at night, prop up a battery operated TV and watch the latest episode of "Combat."

Gentlemen, I am electrically zooming in from the AFN-E Yahoo Group, having served from 73-75 in both Frankfurt and Kaiserslautern.  Searching for information of the usage of VTRs in Vietnam during the war.  Did any of you use videotape? My info is that all the bicycled "tapes" were actually kinescopes.  Did Saigon actually have any VTR?  Back in Europe, Ramstein had an AVR-1 and a couple of IVC VTRs but they didn't get a lot of use. Thanks for any info you may have.

Were videotape machines available in Vietnam?

Thanks, guys, for all the responses. Great information and a great bunch of guys!

Yes we had QUAD VTS's during 70-71 and used them regularly.  There were 3 VR-1100 modified with Intersink Servos in the Siagon Studios, one at Dang, one at Nha Trang, one at Quin non with drum servos only.  Toward the end of my tour we acquired a VR-1200. which was added to the three VR-1100's in Saigon for a total of seven machines.  We received tapes from the states AFRTS LA with sports and news, then we edited out the commercials and sent copies to the other stations, kinescopes to the stations without tape.  Also we borrowed the Vietnanmese Mobile unit and taped the Dec 25, 70 Bob Hope show at Long Binh using one of their Quad machines and cameras.  One more thing, the Army had requested bids for two hundred machines around 1966, in order to compete with RCA, Ampex bid VR-1100's even though they had shut down there production line for them.  The bid was accepted  so Ampex restarted the VR-1100 production again to fill the order, tha'ts why VR-1100's ended up in VN and most Army bases in the US.

I got [to] Saigon in August of 69' and spent about 5 months at the AFVN station doing radio news, TV directing and some camera work.  I’m trying to place you, but my memory is a bit fuzzy.  Were you there when Harvey Bernstein was the company clerk and Mike Lawrence was TV newscaster and Steve Rutt did a heavy metal radio show?

@Park, et al., 69-70 found us recording most all our shows, In Town Tonight, Nashville Vietnam, Star Search (yes, way before THAT other show we had our own version), and everything was recorded live to tape.  We had a talented Kine operator that took the stuff upcountry used and converted it to film for shipping upcountry.  We aired programs on film and tape.  Most syndicated fare came off film as I recall.  Having come in from the infantry (25th) and sitting in the control room switching out Star Trek it was not possible to slap the smile off my face.  I knew I was the luckiest bastard on the planet. :-) Still do.

I donated two to the Army Aviation Museum here at Ft Rucker, along with several reel to reel machines on behalf of the AFVN group.