When I first heard about Stolen Valor, I didn't understand why it was so upsetting to people because I thought that real veterans knew who they were and fakes couldn't diminish their service.   Since then, I've rethought it and wrote the following several years ago.  It's a Donut Dollie version of Stolen Valor.
Nancy

"During the Persian Gulf War I became acquainted with a woman in Washington, DC, who was involved with Vietnam veteran activities and organizations.  She very much wanted to participate in Desert Storm and going as a Red Cross DD or its equivalent if it existed was what she wanted.  She applied but it didn't work out.  During this time, she acquired a Red Cross dress, the blue seersucker ones we wore.
At the next Memorial Day or Veterans Day I saw her at the Wall wearing the dress.  I asked about it and she said she'd been made an honorary Donut Dollie. I can't speak to the circumstances of that because I didn't ask.
What I do remember is a flash of disbelief and anger, and my response that she hadn't earned it.  I could have added that she hadn't spent the year in Vietnam, gotten it dirty with the red dust or black pentaprime and sweat, hadn't tried to maintain her dignity and modesty while hopping on and off choppers and jeeps without showing all, hadn't felt stupid standing on a firebase in a blue dress surrounded by men fully armed ready for battle, hadn't spent years looking at that dress with its Cav patch on the shoulder hanging in her closet and felt the longing to put it on again to be with the men, and hadn't rejoiced in having that opportunity once again when the Wall was built and we finally came together again.
She didn't deserve to hear the vet who rode by on the Run for the Wall call out, “Hey Donut Dollie,” to have a guy hand her a cloth heart because he was giving one to all the women who served, to get a kiss on the cheek from a vet who said he always wanted to kiss a Donut Dollie.  All she had done was put on a dress." 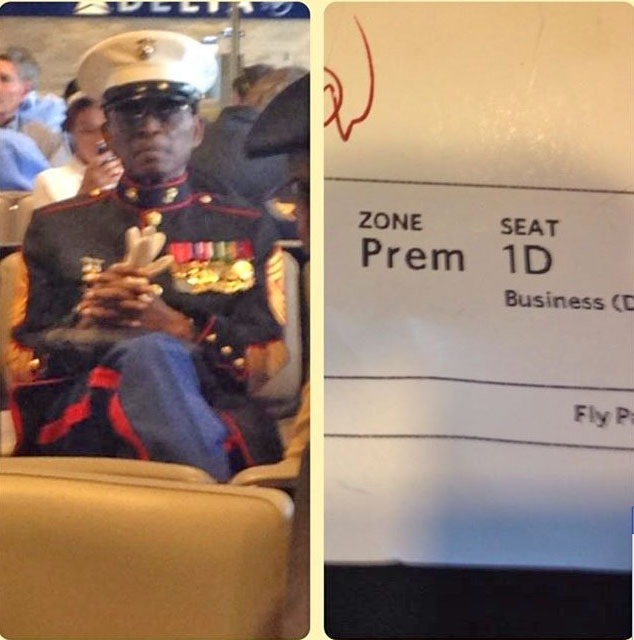 We have been flooded with emails and Facebook posts about the photo posted by DeAngelo Williams giving up his 1st Class airline seat to a Marine at the airport.  While we applaud DeAngelo for his gesture, we also believe he was duped by a fake.  We went over and checked out his Facebook post and saw thousands of Marines commenting calling this guy out on his jacked up uniform, first big red flag was him wearing his cover indoors.  You can view the post here -- DeAngelo Williams Facebook Post  From what we have read, the emails we have gotten and our own take on this guys uniform is that he is a fake.  As you can see in the above photo he is wearing a Silver Star, a Bronze Star w/V device and a Purple Heart.  These medals are out of order, as the Silver Star is higher than the Bronze star,  It should be Silver star, Bronze Star w/V then the Purple Heart.  The Marines in the comment section were highlighting all that is wrong with this mans uniform.   Some of the points made were:
1. A Marine never wears a cover indoors unless he is armed.
2. A Marine would never be at the airport in Dress Blue “A”, he wouldn’t be wearing his cover while seated indoors, and he

wouldn’t be wearing a shooting badge on the right side of said uniform.
3. He is in Dress Blue Alpha uniform and it is not authorized for leave or liberty.
4.  He is wearing a rifle badge on his right breast pocket, you do not wear shooting badges in the Dress Blue A uniform you

wear it with the B uniform and it goes on your left breast pocket.

These are just a few of the many things pointed out by the Veterans and Marines on his post.  Below is another photo of the same guy in the airport on July 1st in the Philippines.  He was approached by a real Marine who thought he looked suspicious, and he asked him a few questions.  As you can see, he forgot his Silver Star in this photo, his highest award for Valor and he forgets to attach it?  His rank is also much clearer, he is wearing Master Gunnery Sergeant rank.

I[t] may be because it doesn't include the Bronze Star!!!  So they voted against it as it is...

Who the heck were the 3 Representatives that voted against the bill?

The problem of people posing as "heroic veterans."

Here is the link to Judge Pinski:  Click Here

Eloquently written, Nancy. You should submit your response to any veterans publication that runs a piece about stolen valor in my opinion.  I truly don't understand  how someone who steals valor away from those who deserve it can live with himself or herself Especially since, for anyone who feels inadequate for not having served, there are some 37 states--I believe that's the number. but I could be wrong--that have state defense forces that serve as support brigades to the National Guard, several without a mandatory out.  In most cases, except for going OCONUS, and depending on the shop, they step in and do the same thing Guardsmen and women do, especially when the Guard is deployed.

In Dennis Surrendi‘s memoir, Set Me Free, self-published in 2014, he told the harrowing story of his time fighting in Vietnam. The details sounded an awful lot like the harrowing story told in Robert Mason‘s own 1983 memoir, Chickenhawk.
Set Me Free describes Surrendi being drafted into the United States Army while attending the University of Wisconsin. According to Surrendi, despite being Canadian and in the United States on a work visa, two CIA agents approached him with draft papers because of his athletic and scholastic background. Surrendi’s fabrications included stating he was one of the most decorated non-Americans serving in the Vietnam War by receiving two Purple Hearts, the Bronze Star for bravery and the Silver Star. None of these things happened to Surrenid, and in fact all of these accomplishments are lifted from the pages of Chickenhawk.
Chickenhawk isn’t exactly obscure; its author was featured in People Magazine, and the book has sold almost half a million copies in its lifetime, so it’s a mystery how Surrendi thought he would get away it. But in an interview he gave around publication, he was confident in his reasons for “writing” the book.
“Psychologically it really bothered me having gone through that experience and not having a chance to even say anything,” Surrendi said. “I wrote it as well because a lot of the guys that are still alive that were in that war encouraged me to write it,” Surrendi said. “When all of us came back, we were ostracized socially, the nations we represented didn’t want anything to do with us, it’s like we caused the war, but of course we didn’t.” “The title is not only to set me free from having to keep all of this in my head, it was to let the world see what Vietnam, which has been under control of foreign government for hundreds of years,” Surrendi said. “So I wanted to embody this setting of Vietnam free as well.”
Mason discovered the plagiarism thanks to an Irish reader who alerted him, and agreed not to sue Surrendi for plagiarism as long as Surrendi apologized publicly. So in the May 27 edition of the Nanton News, Surrendi admitted the lie. “Firstly, I am not a war veteran,” Surrendi wrote, “and secondly, much of the material contained in my book was copied from another book written by a Mr. Robert Mason titled: Chickenhawk.” Mason is less upset at his own personal story being taken than he is at the thought of somebody who never went to war pretending to be a veteran.
Mason says it’s not so much the plagiarism that make him mad, but the fact that Surrendi was parading around as a veteran. “Pretending have been to Vietnam and take credit for it? That’s the most annoying part of it all.”
Like most plagiarism stories, this one ends sadly, with Surrendi’s family cutting off contact.
Surrendi’s deception comes as a shock not only to the small community of Nanton, Alberta where one citizen purchased the first copy of his work for $5,000, but to his family, including his step-daughter, former Wildrose Party leader Danielle Smith. In an email statement, Smith stated her family had no reason to doubt his claims and that, “once my family became aware of the full nature of the situation we became estranged from him.” 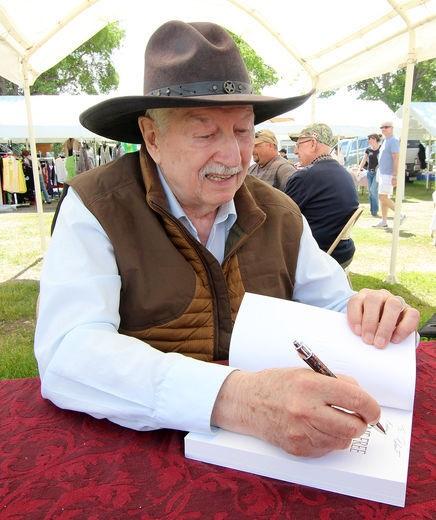 Here is a good case of "Stolen Valor" on Steroids!

And even more stupidity--a trait that seems to be genetic in nature.

The Marine who snapped the above photo said, “I approached and conversed with him.  I am a real Marine and could tell this guy obviously was not.  I proceeded to lecture him in front of the entire airport for disrespecting true patriots.”  He continued, “He said he did 30 years and deserved to wear it.  I then dug further into his story and he could provide no details.  He left after I yelled at him.  His Navy Marine Corps Achievement Medal (green with orange stripes) has an odd device attached.  He is wearing a pistol shooting badge, which is not worn on this uniform and is meant to be worn on the left side (He has it on the right).  He also has an odd contraption on his right side that has no significance.  Further, his white belt is rolled behind his belt buckle.  This is odd as Marines have these tailored to their size.  Finally, he wears his cover (hat) inside, which no Marine would do, this guy sticks out to Marines.”

So I tend to believe the thousands of Marines that are sure this guy was never a Marine.  Someone that served 30 years in the Corps would know how to wear the uniform.  We do thank DeAngelo for what he did, although we do believe he was taken by a poser.  We are working to identify this guy, and once we do we will update this article.  He has technically broken the Stolen Valor law as he received a First Class ticket while wearing unearned medals and badges.  Again we commend Mr. Williams for what he did, and we hope the actions of this poser doesn’t make others not want to do the same.  If anyone can identify this  person, please send us an email at this link. 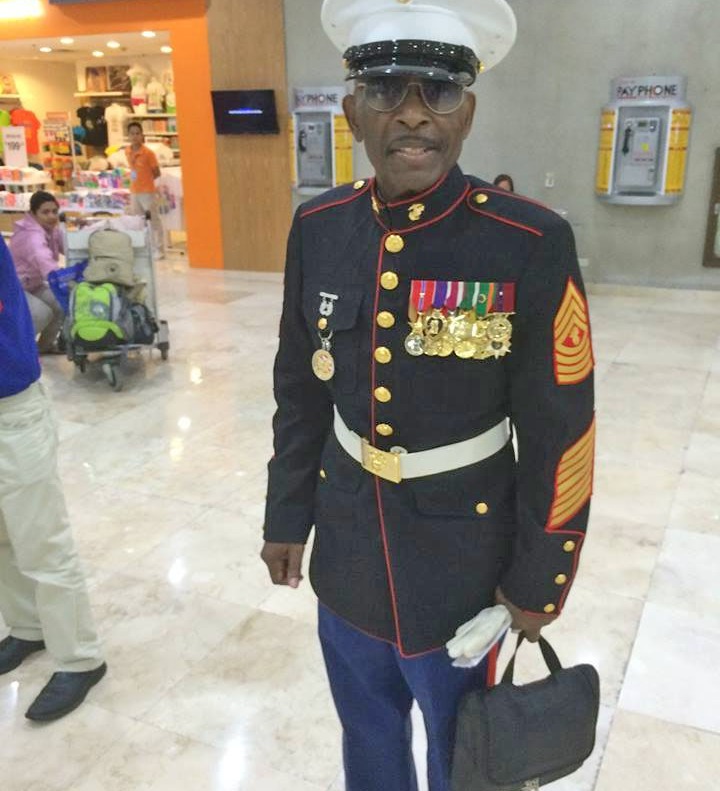 Just figured it out.  These are the 3 who voted against it last year in September 2012. 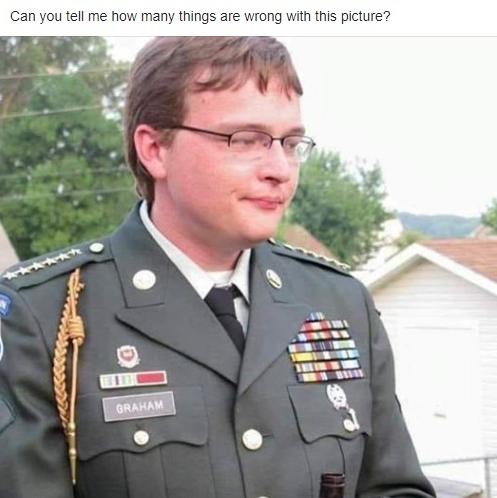 Veteran Lied About PTSD Gets Jail Time and Fine

Search the name Judge Greg Pinski and read about his sentence for each of two men who lied about their military service in order to take their case to veterans court.  In addition to handwriting the names of the 6,756 Americans killed in Iraq and Afghanistan, the obituary of the 40 Montanans killed in those wars, a letter of apology to several veterans groups, and stand in front of the Montana veterans memorial each Veterans Day and Memorial Day with a placard reading, "I stole valor” and “I have dishonored all veterans”  There’s more.  Check it out.

But, at least some of them don't get away with impersonation. 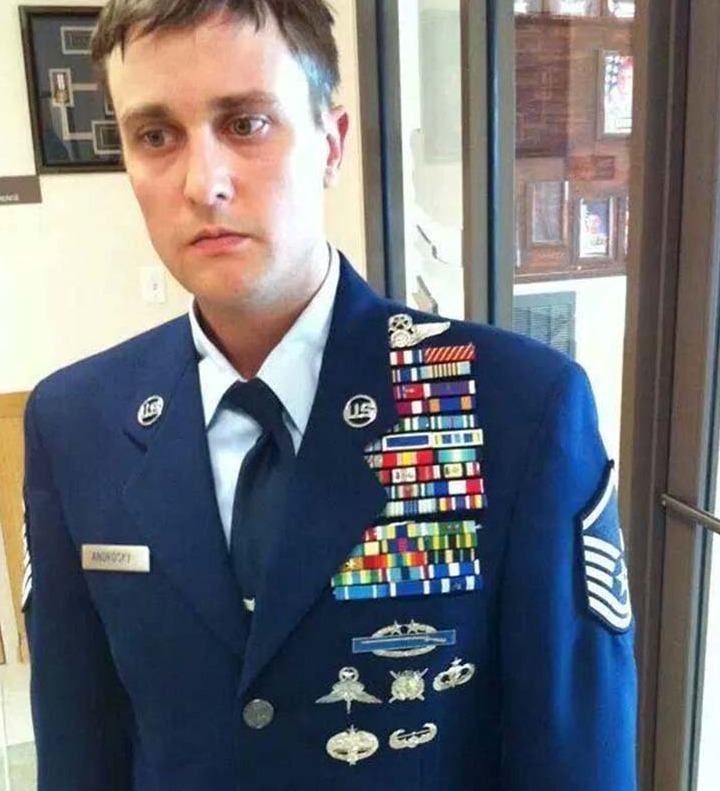 Another character who needs to be identified.