The following is from a message from Michael McNally dated February 7, 2013

I've attached a handout which I received in Saigon in April 1975. A map of assembly points was attached to this paper.

You can see that the intention to play "White Christmas" is mentioned. It also says that a Saigon weather report of "105 Degrees and Rising" will be broadcast. The intention was for the message to play every fifteen minutes for a two-hour period.

The paper refers to the "American Radio Station" and gives the frequencies as FM 99.9 (primary) and  FM 90.1 (secondary).

I definitely heard the evacuation message once, during daylight hours, on 29 April 1975, Saigon time.  I think Chuck Neil says the message first went out sometime before noon.

Don't be surprised if some people who were evacuated say that they never heard the message.  Listening to the radio was not a priority that day. You did not need a radio message to tell you that the final evacuation of Saigon had started.  Air America and military aircraft were in the sky.  After I heard the message in my apartment, I did not listen to the American Radio Service any more that day.  I did hear BBC broadcasts on a shortwave radio.

Also, don't be surprised if someone who says they heard the message claims to have heard Bing Crosby singing "White Christmas."  I recall that on 29 April 1975 I had a doubt that it was Bing Crosby, but I was dissuaded over the years by reading books claiming it was Bing.  When I read Chuck Neil's account, I listened to the Tennessee Ernie Ford version, and think that must have been what I heard. Incidentally, although Chuck Neil and I were both in Vietnam from 1967 to 1975, I don't think I knew Mr. Neil.

The following is from a message from Ann Kelsey dated February 4, 2013

According to Chuck Neil's chapter in Larry Engelmann's book, the whole idea of the code message and White Christmas was Ann Bottorf's.  She was the PAO at DAO and died in the C5A Babylift crash in early April.

The following is from a message from Bob Morecook dated December 16, 2011

AFVN Saigon closed down in March 1973, leaving behind one other enlisted trooper and me to train ARS -- the civilian "American Radio Service" radio run by Pacific Architects and Engineers.  They got a contract for the station.

The other guy and I stayed another day or so -- it was supposed to be 90 days but we got kicked out early.

American Radio Service had ONLY the FM equipment -- the AM radio stuff was all shipped out of the country, much to AFKN.

ARS did news live from the AP and UPI teletype. I do not know if they got AFTRS sound feeds too.

It was ARS who played White Christmas on the air as the message to get out of Saigon.

I had the honor of being the last AFVN'er on the air -- as well as announcing the end of the Vietnam War on AFVN-TV -- Tom Fowlston announced the end of the war on AFVN radio. -- I got a call from PAO at MACV to put an automatic message up the day AFTER we signed off -- otherwise the CO LTC Hutchison was last person on the air.

The White Christmas message is recounted in the oral history -- Tears before the Rain: An Oral History of the Fall of South Vietnam by Larry Engelmann.  His account of the last days runs to a number of pages.  The guy who provides the orgal history in that book is one of the men I trained to do news for ARS. 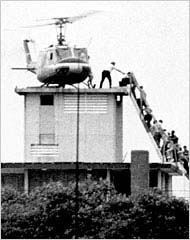 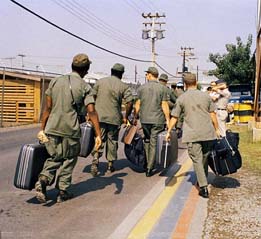 Additional Information About the Closing of AFVN 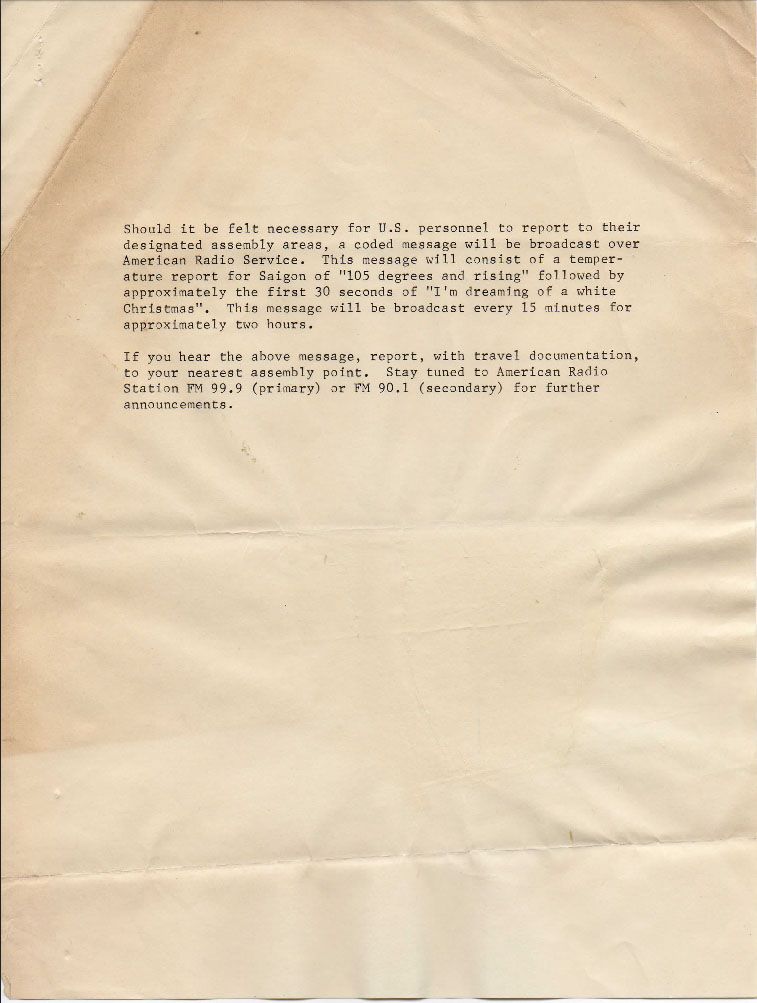 The following is from a message from Michael McNally dated February 3, 2013

Thanks to Ann Kelsey for tracking me down thru the Saigon Kids site, and Bob Morecook for admitting me to the AFVN Group.  My name is Mike McNally. I was not an AFVN employee, but I probably heard more AFVN and American Radio Service broadcasts in Vietnam than almost anyone.  I thank all the AFVN personnel for the great service they provided.

I arrived in Vietnam in May 1967 as an enlisted intel analyst (96B20).  I left Vietnam on 30 Apr 1975 as a civilian attending the University of Maryland, Far East Division, Saigon.  I was also inside the former AFVN facility on Hong Thap Tu Street at least one time in 1974, as a contract security officer for DAO security.  The local national guard at the facility came under DAO jurisdiction.

On 29 April 1975, I was living in an apartment building on Truong Tan Buu Street, located between Tan Son Nhut and Saigon.  About 0400 hours I was awakened by the rocket attack on the Defense Attache Office, the former MACV Headquarters, which killed two Marines, Judge and McMahon.

Sometime during the morning, I was listening to the radio with another American and a Vietnamese woman.  I heard White Christmas playing, but I recall thinking that it did not sound like the Bing Crosby version.  Chuck Neil, of Federal Electric Corporation, FEC, has written that he could not find the Bing Crosby version, so he substituted a version by Tennessee Ernie Ford.  I then heard Chuck saying that "The Temperature in Saigon is 105 Degrees and rising."

I was eventually evacuated off the roof of the embassy after midnight, 30 April 1975 Saigon time. I was not on the last helicopter.

I have a Masters in History from California State University, Los Angeles.  I retired in 2011 from the Los Angeles Department of Water and Power, as an electric station operator.  I have a Vietnamese wife. I have not been back to Vietnam, but I have paid for many family members to go back for visits.

I am a member of three other Yahoo Groups, CICV, (Combined Intelligence Center Vietnam), MACV-DAO, and the 519th MI Battalion.

Thanks again to Ann and Bob. I'll try to peruse the past messages to see if there's anything about which I might have some knowledge. If anyone has any questions they think I might help with, please ask.  Thanks.