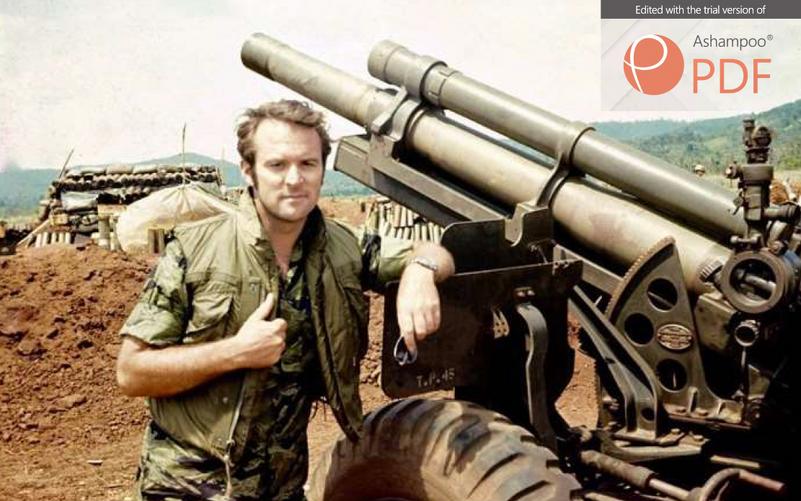 Republic of South Vietnam Firebase in 1967.

Former US Marine Ken Watkins joined me on the Rex roof for the meeting with Hanoi Hannah.  Ken is now a counselor at the Vietnam Veterans Outreach Center in Houston, Texas.  He had returned to join a group of veterans from Garberville, California to build a health clinic in Vung Tao. Ken had been confronting many old ghosts of his Vietnam duty in the past weeks.  Hanoi Hannah would be yet another phantom to encounter face to face.  Ken was a regular listener of Hannah's during his time as a corpsman with the U.S. First Marines based at Marble Mountain in 1966 . Ken recalled, the signal was pretty good around Da Nang and we would tune in once or twice a week to hear her talk about the war, a war I was beginning to question and wanted to hear discussed.  U.S. Armed Forces Vietnam Radio didn't talk about the war really, they ignored the issues or public attitudes at home.  Hanoi Hannah didn't necessarily make sense and there was a certain awkwardness; she used American English, but really didn't speak our language in spite of her hip expressions and hit tunes, even tunes that were banned on U.S. Army radio.  The best thing going for her was that she was female and had a nice soft voice.

Any of her broadcasts you particularly remember?  I asked Ken while waiting for Hannah to arrive.  "Whenever she named our unit, the First Marines, and where we were, that always stands out in my mind.  Some of us thought she had spies everywhere or a crystal ball."

"Do you still feel anger toward her, Ken?"  "Sure, some antagonism, add it to the Vietnam list, but this trip back is about coming full circle on a lot of things and she is another voice from the past I want to confront in person."

So an old Marine and an old journalist waited that sunny Saigon morning on the roof of the old Rex for the real Hanoi Hannah to appear, waiting for reality to sweep away years of bitter old images in the mills of our minds. Dragon Lady? Prophet? Psy-warrior par excellence or what? Like so many of the phantoms encountered in Vietnam she was not what she seemed.

She was not a phantom.  She didn't look like a dragon lady and she was on time.  A pleasant looking woman, slim, well groomed and attractive showed up at 10:00 am sharp on the Rex roof accompanied by an escort from the External Affairs Press Office.  The wartime sounds of Radio Hanoi came flooding back.

Don: "Thu Houng, you played a lot of American rock music, where did you get it?"

Hannah: "Yes, yes, we bought the music from progressive Americans who came to visit Hanoi.  We also have our own music, but I think that the GIs like to listen to American music, it's more suitable to their ears."

Don: "Have you ever heard from those GIs who heard your broadcasts and to whom you became a household name?"

Hannah: "After the war we received one letter from an ex-GI who said he listened to our broadcast and now that the war was over he is back home and wanted us to know about it.  I am sorry that I forget his name, it has been quite a long time now."

Don: "What prompted your government to begin your broadcasts to American soldiers."

Don: "What about the foreigners who helped you during the war?"

Hannah: "The Australian journalist Wilfred Burchett helped us from time to time and a French woman, Madelaine Riffaud.  We did several interviews with Cora Weiss and Jane Fonda.  We asked Jane Fonda if she would like to meet American pilots in Hanoi, but she refused, she didn't want to. I saw the pilots sometimes and we broadcast statements but I never interviewed them either.  They were authorized to listen to our broadcasts.  And we broadcast tapes sent to us from Americans against the war.  These were most effective I believe.  Americans are xenophobic; they will believe their own people rather than the adversary, even a friendly enemy voice."

Don: Did you ever evaluate the effects of your broadcasts?

Hannah: No, during the war it was difficult to get feedback except through foreign news reports but we knew we were being heard."

Don: "What were your main aims?"

Hannah: "We mentioned that GI's should go AWOL and suggested some frigging, or that is fragging.  We advised them to do what they think proper against the war."

Don: "But there were few, if any, defections of Americans, did that surprise you?"

Hannah: "No, we just continued our work.  We believed in it.  I put my heart in my work."

Don: "Many American soldiers think you received excellent intelligence on their unit positions and battle readiness and casualties.  What was the main source of your information on US troops in Vietnam?"

Hannah: "US 'Army Stars and Stripes.'  We read from it.  We had it flown in everyday.  And we also read 'Newsweek,' 'Time' and several newspapers.  We could also intercept the AP and UPI wires and of course we had the news from our Vietnam News Agency and we rewrote it.  We had many sources of news.  We took remarks of American journalists and put it in our broadcasts, especially remarks about casualties...high casualties.  There was the list of Missing in Action, those who were killed on the battlefield, we read the news with the native place."

Don: "Sometimes the North Vietnamese Army when the killed Americans would find letters to their families.  Did you ever get such letters and read them?" Hannah: "No. Maybe the Army, but not our radio station."

Don: "Do you remember any articles in particular that you used?"

Hannah: "Yes, Arnaud DeBorchegrave in 'Newsweek'  I remember we used his articles.  And Don Luce about the tiger cages in South Vietnam.  We would often say to the GIs that the Saigon regime was not worth their support."

Don: "Did you ever announce attacks before they took place?  Many soldiers in Vietnam thought you did?

Hannah: "No, but, um, I don't think...for example, if we made a sum-up of war news maybe the GIs will guess something. I don't know.  We never informed that such and such a battle would take place.  That we would not do."

Don: "You never gave any hints of what would take place?"

Hannah: "Well, in our talks we said that if they were in Vietnam, how could they avoid the war zone and maybe they will get bad chance, maybe killed.  But its not that such and such a battle took place."