There are some things sacred to Americans that not even a war can interrupt.

One of them is the World Series. Thanks to "Blue Eagle" -- The Navy's newest flying radio station -- operated by pax's own Oceanographic Air Survey  Unit (OASU) -- men of the U.S. Seventh Fleet in ships scattered over the South China Sea and the ground combat forces on South Viet Nam were able to hear the 1965 World Series.  Blue Eagle received the baseball broadcasts from the U.S. and retransmitted them to the area below as it cruised at10,000 feet. The series was thought to be important enough to our front line combat troops and ships at sea that Navy forces, at the request of General Westmoreland -- the senior U. S. Military Advisor ni Viet Nam shifted the Blue Eagles from Stateside duty to Saigon. The forces in the RVN were so impressed by the aircraft's performance that the Pentagon granted General Westmoreland's request to continue us of Blue Eagle until December 1.

Blue Eagle is the sign of the aircraft of Project Jenny.  This project, assigned by CNO, is, in addition to many other projects being completed by OSU, under the command of Cdr. H. R. Hutchnson.  OASU also maintains an additional C-121 in the Far East as a support craft for Blue Eagle.  Both the Blue Eagle, with Plane Commander Lt. Tom Hampton, and the support aircraft, with Plane Commander Lt. Herbert Gidge, and their OASU crews are expected to return to Patuxent the first part of December from Viet Nam.

With less than one days notice, Cdr. Hutchinson along with Lts. Hampton and Gidge, and 34 additional crew members from OASU departed for Viet Nam.  The first World Series game was forwarded live and re-transmitted from Blue Eagle while airborne.  The remaining games were taped by the Armed Forces Radio Station in Saigon and then an airborne rebroadcast from the tapes made to the forces eight to ten hours after the actual completed of the games.

Cdr. Hutchinson returned to Pax on October20 to resume his duties as commanding officer of the unit.  He reports that Blue Eagle has become a pretty famous aircraft in the Southeast Asia area and also expressed pride in OASU personnel which have flown and maintained both aircraft under difficult and unusual circumstances.

In addition to the Blue Eagles broadcast service, OASU is currently involved in several other well known world-wide ventures.  Among these are Project Magnet (the scientific collection of the earth's magnetic data to up-date charts, maps, navigational system and space programs), Project Birdeye (Polar eye survey), and Project ASWEPS (collections of sea temperatures and wave measurements for ASW systems. 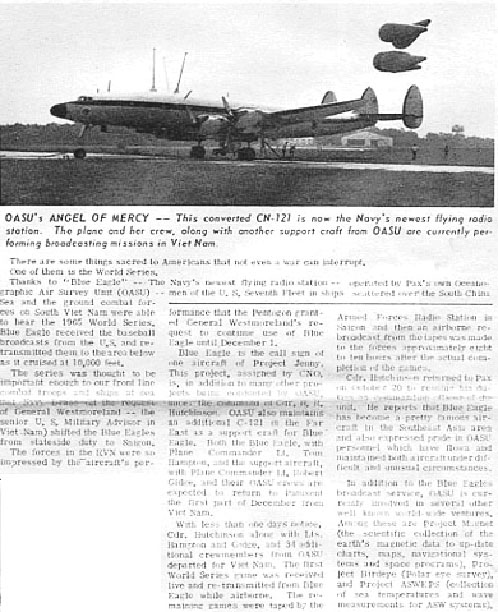 This article, from the Pax River "TESTER" dated November 5th, 1965, is about Blue Eagle I deploying to

Vietnam to do relay broadcast of the World Series.

The mercy mission, of course, was bringing baseball to the troops.