Parts of McNamara's "Phased out" Units:

Two planes have been transformed into flying television stations, and the third into a radio station.  Each TV-equipped aircraft is capable of broadcasting two channels simultaneously from 12,000 to 15,000 feet above the ground.  One channel will be programmed and operated by the South Vietnamese government.  The other channel wll broadcast popular American programs donated by the television industry to U.S. Servicemen.

Included in the $1.4 million project are 1,000 television sets to be distributed to neighborhood meeting places in Saigon and nearby villages.  Another 500 sets will find homes in American mess halls, barracks and recreation areas.

The aerial television stations are only a temporary measure, to be replaced by ground stations before July, according to Henry Valentine, Chief of Operations for Armed Forces Radio and Television.  When the ground stations are completed, the planes will act as relays, increasing the broadcast radius.

The radio-equipped plane, Blue Eagle I, will have high power transmitters useful for both AM-FM sending and shortwave.  It will be used in military command and control operations where establishment of ground facilities is difficult. With less than one day's notice, Cdr. H. R. Hutchinson, OASU's Command Officer, along with Lts. Hampton and Gidge, and 34 additional crew members departed for Vietnam.  The first World Series game was received live and re-transmitted from "Blue Eagle" while airborne.   The remaining games were taped by the Armed Forces Radio and Television Service in Saigon and then an airborne rebroadcast from the tapes was made to the forces.  These latter broadcasts normally occurred from eight to ten hours after the actual completion of the games.

After their first transmission, military officials in Vietnam--so impressed with the plane's performance and boost to morale--requested and were granted permission to keep the aircraft in the area for further broadcasts.

While deployed, the Blue Eagle was based at an airfield in Saigon.  The support plane handed supply and maintenance missions, with its base at Sangley Point in the Phillipines. The OSU planes coordinated all work with the United States Information Agency (USIA) and the Armed Forces Radio & Television Services (AFRTS) in Saigon. 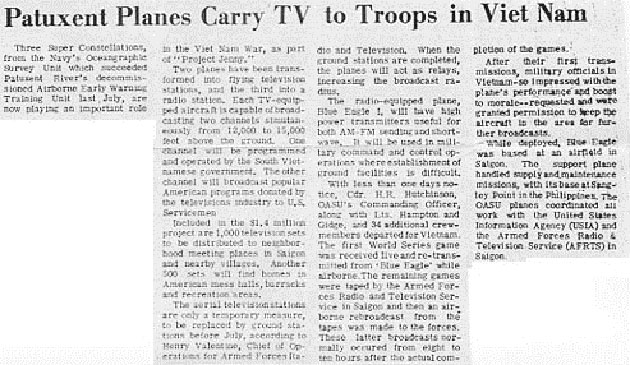 being deployed to Vietnam to Broadcast the World Series.